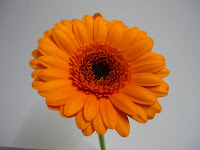 This was a less popular project we got in the autumn 2010.
I have been having problems with the final video I did but I think I got it in the end.

The project was to buy one flower and do as much research on it as possible. Study all the changes and record them in paintings, sketches etc. Use as many different mediums as possible. 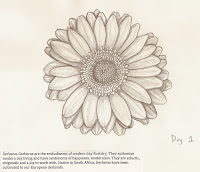 All the material we produced was going to show as if this was the last flower of its kind. How would we show this to the rest of the world so people that grew up without it would be able to
experience it. Difficult task indeed. 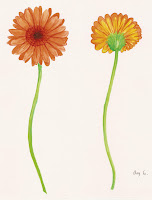 I chose a bright orange gerbera. I love gerberas, they are so bright and happy!The research was hard, sitting drawing the same flower in different angles everyday.

In the end I decided to create an animation of the life and death of my flower. I became a very short one using about 48 images to create a sequence. I also added a soundtrack fitting for the occasion. Flight of the Concords "Au revoir".
Saying goodbye to the last gerbera in the world.